Before & After – An IKEA Sofa Makeover

When it comes to design, I'd rather not settle. Times may be tough, but with a little out-of-the-box thinking and a good helping of elbow grease, you don't have to either. Case in point: When our friend Jordan and her husband first moved into their small New York City apartment, they didn't have a single piece of furniture, save for an air mattress slowly deflating with every passing day. In need of a quick, affordable solution that met their short-term needs (a place to sit and sleep) and long-term wants (extra storage and a bed for guests), they headed to—where else?—IKEA. 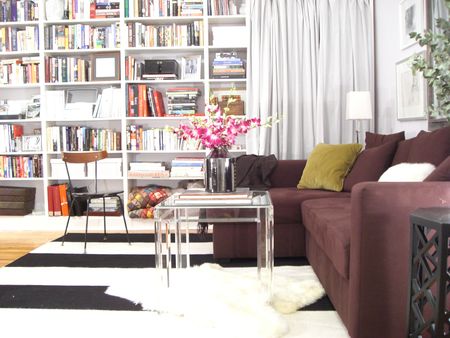 There, they settled on the Manstad, a sofa-with-chaise that has a double pull-out bed AND hidden storage (only at IKEA, right?). And at a cool 900 bucks, the purchase was a no-brainer. There was only one problem, but it was BIG: the quality of the fabric was as poor as the price was low—so coarse that it was impossible to keep clean and lint-free. 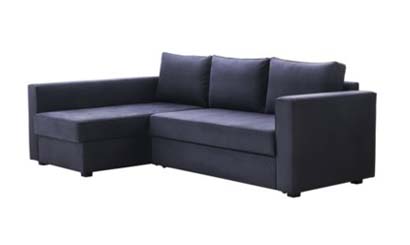 Since a professional reupholstery job would have cost more than the sofa itself, Jordan went looking for the next-best-thing at Bemz, an online retailer that sells ready-made slipcovers for over 90 IKEA sofa models—but, as luck would have it, not for the Manstad. That left only one option: she'd have to do it herself! Since the sofa (like most things from IKEA) came in several ready-to-assemble pieces, she reasoned that she could cover each piece separately. For the seat cushions and arms, which have visible seams, she would use custom cushion covers; for everything else, a couple of yards of fabric would do. Here's how she did it, step-by-step, using only a staple gun and an Exacto knife, IKEA hacker style!

1.  To begin, she went to one of my favorite online resources, the Slipcover Shop. They have tons of ready-made and custom options and best of all, they get the job done fast. (Jordan received her custom order just four days after placing it!) Although they don't take C.O.M. (customer's own material) orders, they have hundreds of in-stock fabrics to choose from. Jordan decided on a basic twill in chocolate. 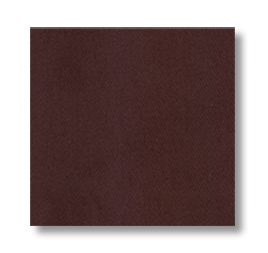 2.  To cover each of the seat cushions (which, you might remember, have visible seams), she ordered the Elasticized Fitted Mattress Cover, which is just like a fitted sheet, only more durable. Once she lined up the seams, she used a staple gun to secure the cover to the underside of the cushion, pulling it taut to create the look of a sewn cushion. (When using a staple-gun to affix fabric, place your first staple in the center of the side you're covering, then alternate on each side of that center staple until you work your way out to the edges.) Here you can see the elasticized mattress cover on the raised seat cushion, before it was stapled. (You might also recognize something familiar in the storage compartment!) 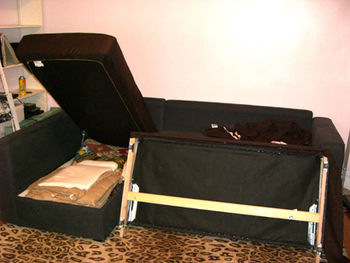 3.  To cover the sofa's arms, which also had visible seams, she ordered two Zippered Cushion Covers, which are made especially for cushions (or in her case, arms) with box corners.  Since the bottom and back edges of the arms wouldn't be visible in her small apartment (the sofa sits against a wall), she had the zipper located along these two adjacent sides. Before she put the cushion covers on, she marked with chalk all the points where the arms screwed into other parts of the sofa, then made tiny incisions into the fabric with an Exacto knife. 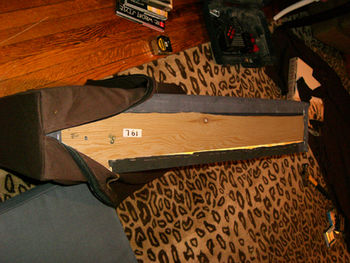 4.  Finally, she covered the remaining portions of the sofa (the bottom frame and the two rectangular back pieces) using a staple gun and about three yards of fabric. 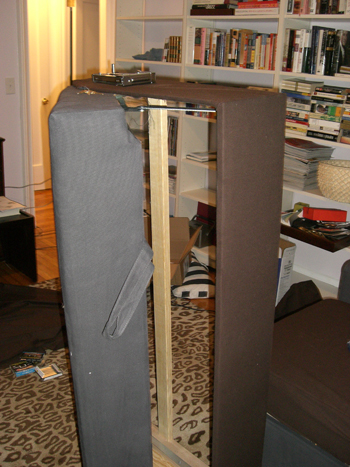 And there you have it! A sofa that's practical and, with a little Designer DIY, just as polished. So when it comes to designing your space, I hope it just proves that with a little imagination and a bit of elbow grease, you really don't have to settle! And in times like these, is there anything more satisfying than that? 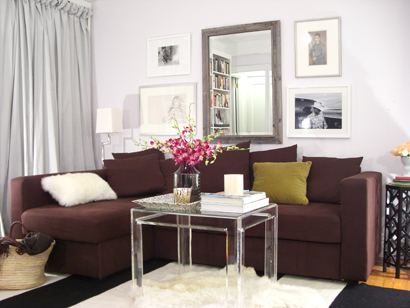