Whenever I'm decorating for a client, a magazine, or even for myself, I love blending traditional and modern elements in unexpected ways. Take the crewelwork story I did at Martha back in November 2007. For those of you unfamiliar with the term, crewelwork is an embroidery technique done with wool thread on a closely woven ground fabric, like linen or cotton. Vine, tree, and flower patterns predominate. Now if the thought of crewel is so dated and dusty, it makes you want to sneeze, think again! As a decorating editor at Martha, I was always out and about at fabric houses in the city to preview new designs for future stories. It was fall 2007, and crewel, it seemed, was making a comeback! So we thought—why not do a story using crewel and other traditional embroidery patterns, but updated with a fresh, more modern feel? For the first scenario, we shot a bright-on-dark crewel pattern in my friend (and fellow blogger) Abby Jenkins Boal's quaint cottage in Connecticut. Thank you to Eric Piasecki for his great photography on this story! 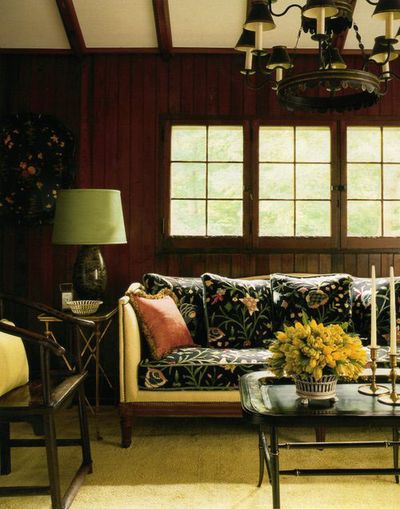 The modern, clean-lined sofa was Abby's, so to mix things up a bit—and to save money in producing the story—I had
a new slipcover made for the seat cushion and pillows for the back, each of
which framed a central element in the textile. They may be different, but conceptually, I think they work well together. 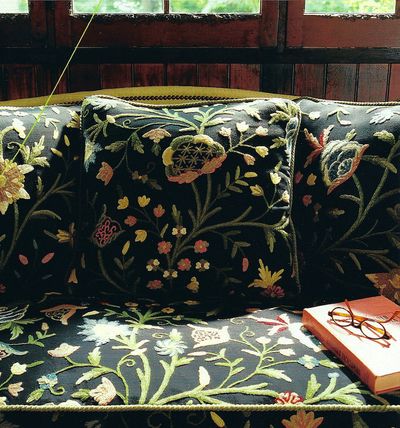 Apparently, so did Pottery Barn. Flipping through a recent catalog, I couldn't help but experience a bit of déjà vu when I saw this pretty pillow. 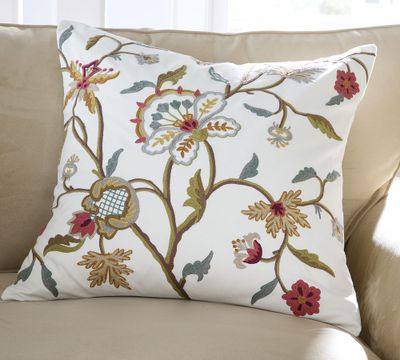 The crewel pattern is different with a ground color that's light, fresh,
and far more mass—the black I used was for a fall issue—but the
likeness I think is uncanny and the timing (two years out) impeccable. I love what we did for this story at Martha, but what I love even more is that beautiful crewelwork is now available to everyone! This scenario, a set I designed and my old colleague, the talented Thomas Eberharter, built, was definitely my favorite. 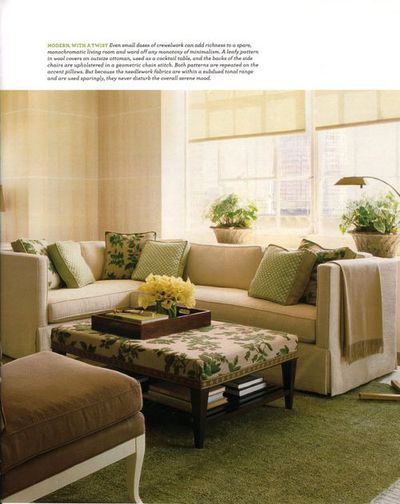 From the look of it, you'd think it was the most luxe loft in Soho,
thanks to Tom! For a contemporary sectional sofa, I had
pillows made from a traditional crewel textile but in a modern, boxlike
shape. The ottoman we borrowed from Baker, then had an elastic
slipcover made from a leafy pattern in wool with a decorative trim.
Here's a close-up of the Stark geometric chain stitch on one of the custom pillows. 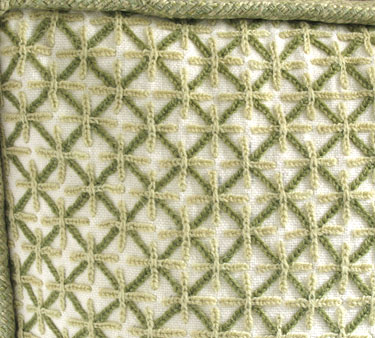 And here's a swatch detail of another pretty crewelwork pattern from Pottery Barn. 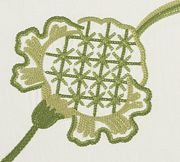 At Martha, we loved how serene and fresh the green looked in the living room so much, we wanted to carry it over to the bedroom as well. This upholstered headboard I had made from a whimsical paisley duvet cover, then available from Traditions by Pamela Kline. If you like the look of this bed… 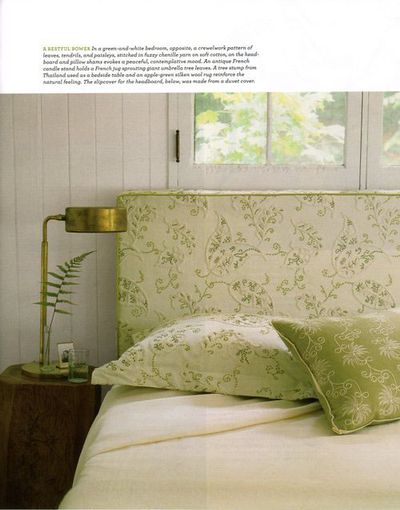 …there's always this one too. 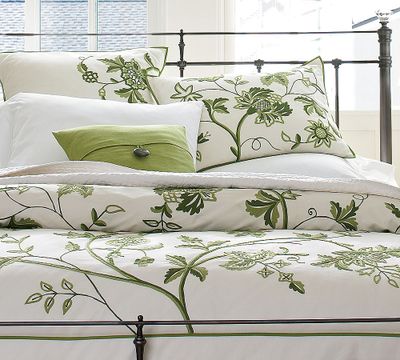 And finally, for a luxurious crewelwork curtain in the bathroom, I railroaded (oriented horizontally) a classic floral textile, then added linen borders at the top and bottom. Traditionally, crewelwork was finished front and back, so it's ideal for curtains, especially sheers. For the Martha shoot, I wanted to do a shower curtain that gave some privacy but that was still light and airy. 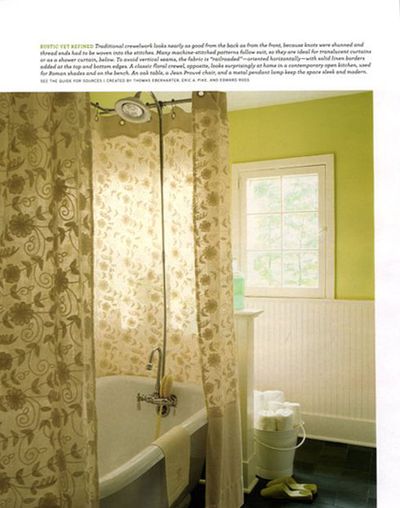 It seems PB liked the idea too. Here's a delightful drape from their current collection. 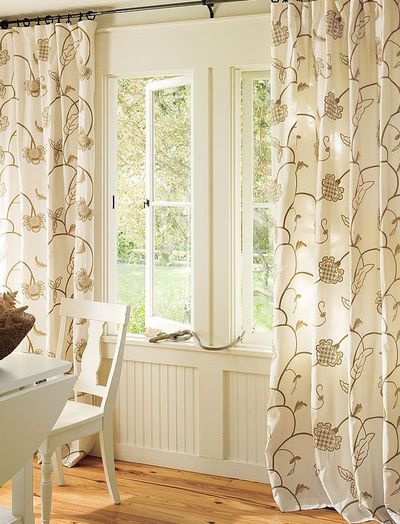 It's a crewel world out there, kids, but a pretty one at that!