A Light Lunch for Four

Have you ever wondered why the food in magazines like Gourmet, Bon Appetit, and Australia's Donna Hay always looks so good? It's not as if we can taste it—or smell it. We can't even hear it, as we do on television, where a carefully mixed medley of dicing, slicing, stirring, and sautéing conjures the illusion of a gourmet meal cooked right before us. As a former caterer and style editor for magazines, if there's one thing I learned about food, it's that people eat with their eyes. To that end, styling for shoots was all about knowing well ahead of time what's being served and how to make it as appetizing as possible. It was about having the right antique cutting board for the individual grilled pizzas or the perfect cake pedestal for the lemon coconut cake. In short, making pretty pictures out of food was about being prepared, and it's a process I go through every time I entertain. That way, I know my food will look (and taste!) as good as it can for my guests to enjoy. Entertaining, I've learned, isn't rocket science, but there's a formula to pulling it off with panache. It's one part skill and about ten parts preparation. You can serve the simplest food, a mix of store-bought and homemade, but if you've thought through the presentation, and executed it well, you're bound to succeed! Here's my process for a fun al fresco lunch Jaithan and I hosted here at the house not too long ago. 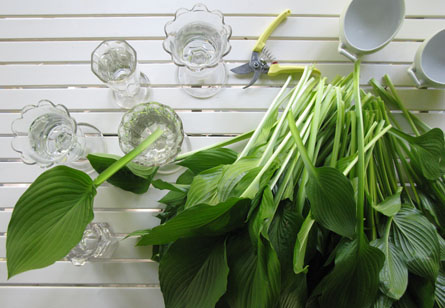 It was an unseasonably warm afternoon, so I knew I wanted the
food to be light and fresh. After some thought, I settled upon an
Asian-inspired menu, and so to start, we began with a passed appetizer,
a nibble of something small but pretty—sesame beef
with Asian slaw on wonton crisps. No recipes as yet, I'm afraid, only
the fast, spontaneous mixing of foods and flavors I've done for years,
ever since culinary school. And for the main course—Vietnamese chicken
in lettuce wraps with cucumber, mint, and cilantro. Preparation for
this party began, as it often does, two, three days ahead when I
started to experiment with presentation. Now I've worked many a
cocktail party in my time, and there's nothing worse than the sauce of
an hors d'oeuvre dribbling relentlessly down your shirt. Little butter pats like
these from the flea market make the perfect plate for canapes. They're
pretty while still keeping the food neat and organized. Then, to keep
things light on the table, I decided on a footed ironstone bowl for the
chicken, together with a mix of monogrammed coin silver spoons. That
way, every guest would have a spoon throughout the meal without having
to wait their turn. (Delayed gratification, Jaithan reminds me, is not
my strong suit.) 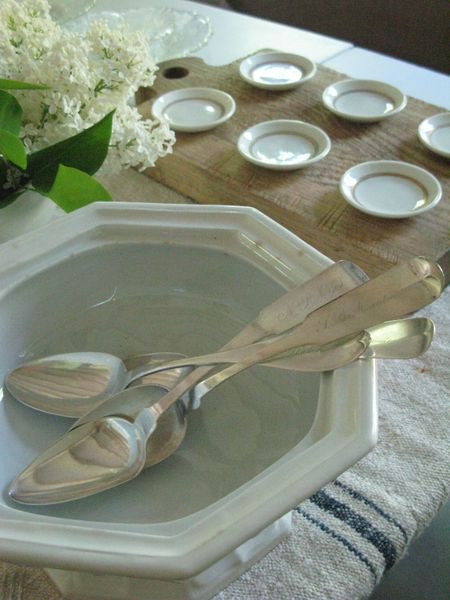 While the chicken would be served out of a single bowl, the fixings—Bibb lettuce, lime, cilantro, mint, cucumber, onion, and cashews—I decided to do individually. Each guest would have a plate (an ironstone oval platter to be precise) with everything they'd need, but to keep things from looking messy, I added three Handblown Glass Mugs at every setting, along with a low crystal bowl and demitasse spoon. The way I see it, it doesn't matter if I'm decorating or entertaining, there's always a new way to use old things: butter pats for hors d'oeuvres, over-sized platters for plates, punch mugs for vegetables, and demitasse spoons for cashews. 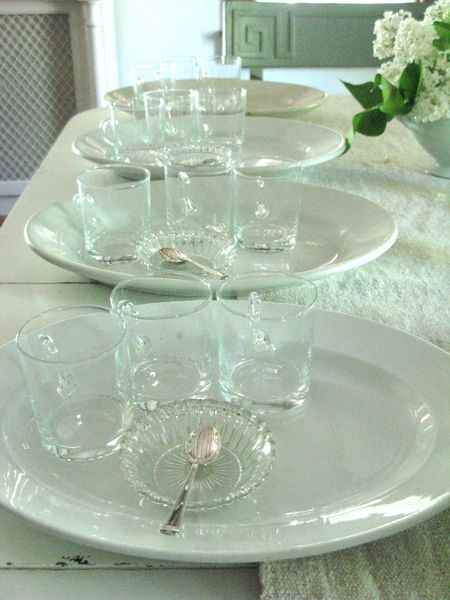 Here in upstate New York, It's not often this spring the days have been hot, but on this particular afternoon, the temperature would reach 90 degrees. Dessert, like the rest of the meal, would have to be refreshing and light. At Adams Fairacre Farms in Rhinebeck, where Jaithan and I had shopped two days prior, the melons looked especially fresh. And so for dessert, I decided to do a simple mix of chilled honeydew and cantaloupe melon balls with fresh chiffonaded mint and homemade candied ginger. Now of course, if I were in the midst of the party, busily clearing lunch plates and preparing dessert, I'd simply grab the plates closest to me, though inevitably not the prettiest they could be. We've all been there—myself included. But this lunch was all about planning, and that includes dessert. So after a quick dip into the butler's pantry, I came up with this set of Pressed Glass Ginko Leaf Plates and bowls, together with vintage teak forks from the 60s. From the lettuce, cilantro, and mint in the wraps to the simple ferns on the table, greenery figured so prominently in this meal that I thought the leaf plates and bowls would work well. 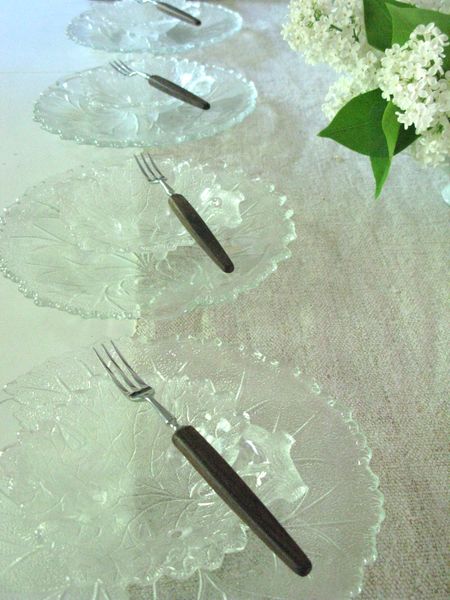 The porch, like the rest of the house, is still very much a work in progress, but it's definitely where we'll be spending much of summer. For the table, I wanted to do something simple, informal but still polished with a mix of china, silver, linens, and glass, collected over years. The napkins are vintage Cannon dish towels with green banding I picked up at Elephant's Trunk in New Milford, Connecticut, while the tablecloth is homespun linen from a thrift store in Warrenton, Virginia. 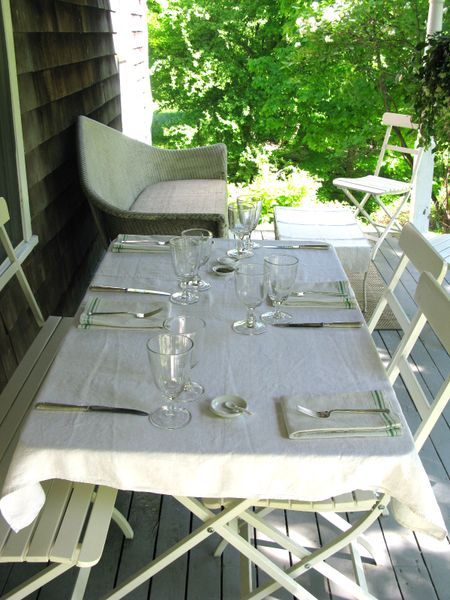 Flowers, as you might know, I love, especially big, beautiful arrangements, but this table would be more about the food than the flowers. Simplicity was key, so in pressed glass ice cream cups repurposed as vases, I did three casual arrangements of ferns from the garden. I thought they added just the right amount of decoration and life to the table without overpowering it. 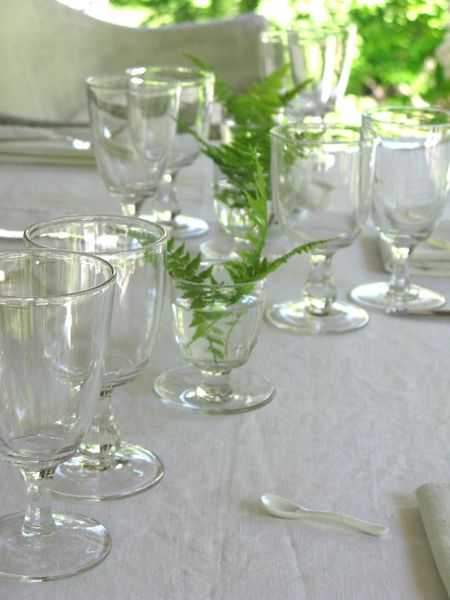 With the table all set and our guests from the city finally here, we began the afternoon with—what else?—cocktails! To complement the Asian-inspired menu, I mixed passion fruit and vodka with a splash of champagne and a spring of mint. 90 degrees never tasted so good! 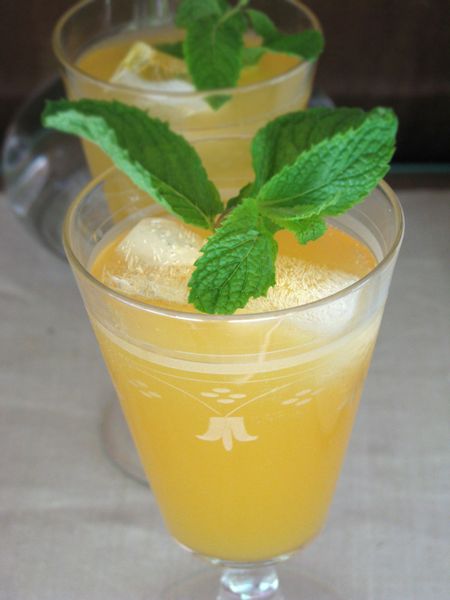 For the base of the hors d'oeuvres, wontons cut into squares would have surely done the job but not nearly as beautifully as these. All I did was use a cookie cutter to press out the flower shapes, then
fried, drained, and salted them. For a passed dessert, you could even
pipe them with whipped cream, top each with sliced strawberry, then dust with
powdered sugar instead of salt. How easy (and pretty) is that? 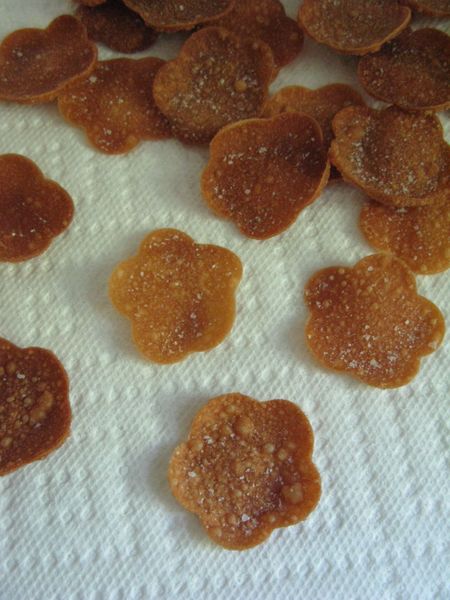 While our guests sipped their drinks, I assembled the hors d'oeuvres, just to make sure the wontons were nice and crisp. The Asian slaw I made from cilantro, mint, nappa cabbage, red cabbage,
carrots, onion, rice wine vinegar, sesame oil, salt, and pepper. The sesame beef I'd cooked two hours prior, let rest, then cut into bite-sized cubes. Next came the sesame-peanut sauce, topped with a garnish of fresh cilantro. 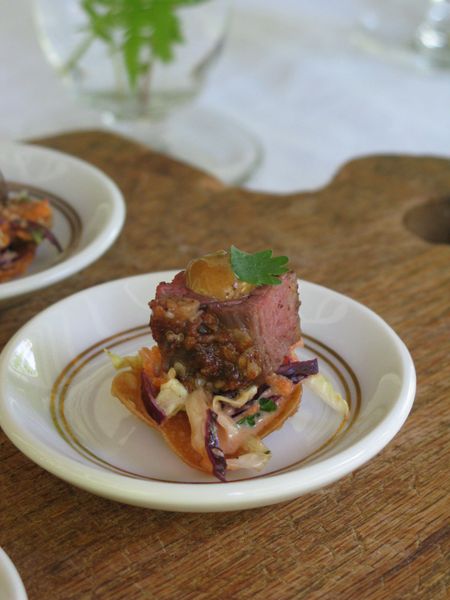 On a day as warm as this, a light, flavorful room-temperature hors d'oeuvre seemed the perfect way to whet our appetites. For the presentation, this antique cutting board I thought played nicely off the sesame beef. 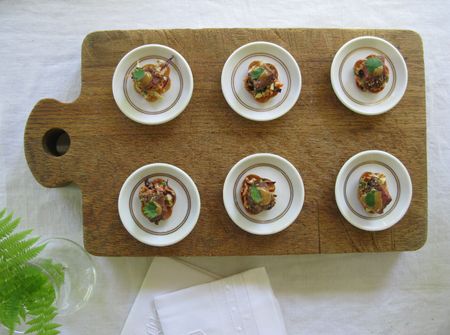 Also prior to the guests' arrival, I washed, cleaned, and chopped all the vegetables for the lettuce wraps. Something like this you could do up to two hours before the meal, cover them with damp paper towels, then refrigerate, so they're nice and fresh. The onions I'd soaked in water the night before, so they wouldn't be so harsh. Here are all the vegetables in handblown mugs, ready for the oval platters—cilantro in one, mint in another, onions, cucumber and lime in a third. 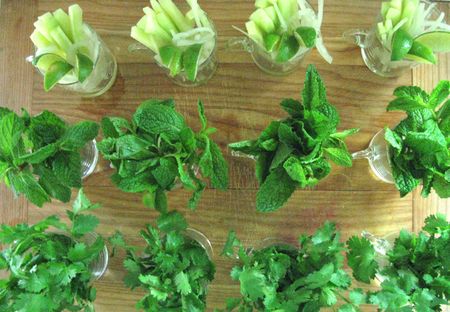 The Vietnamese chicken I'd made the night before with ginger, garlic, scallions, soy sauce, sesame oil, salt, and pepper. While that was heating up—aren't such things always better the next day anyway?—it was time to assemble the platters. Mugs to one side, crushed cashews in the bowl and the crisp centers of Bibb lettuce to round it out. I think it's fresh, organized, pretty and most important, appetizing. 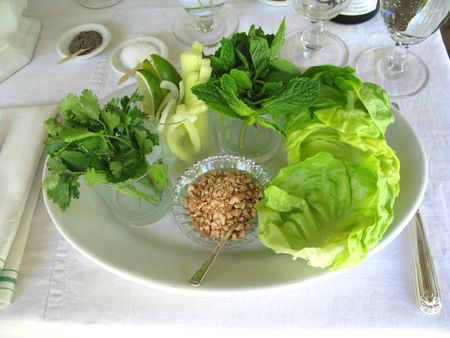 Here's the finished table right before we all sat down. To accompany the chicken, I chose to serve a light, crisp Sauvignon Blanc, well-chilled, from our friends at Little Gates. 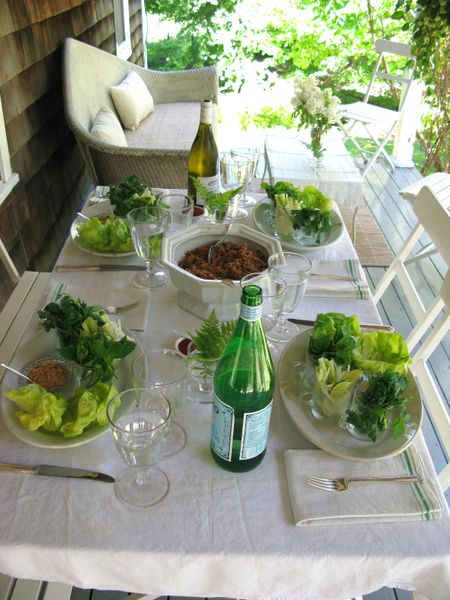 The Sriracha chile sauce added a hint of hot and a pop of color. Together, the mix of textures and flavors made for a meal that was light, refreshing, and beautiful with plenty of hands-on interaction! 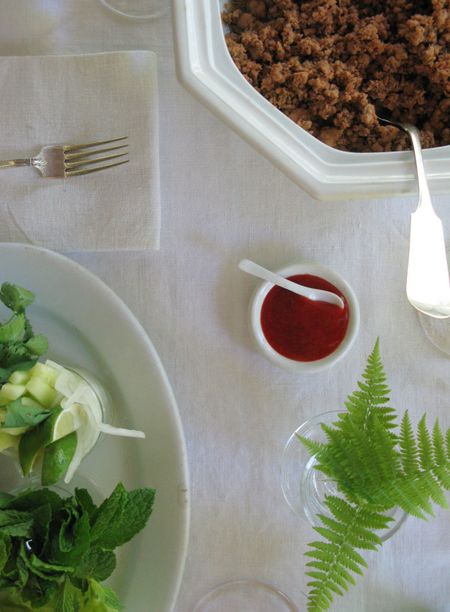 And now for dessert! The melon balls I'd prepared the night before, but the mint I chiffonaded right beforehand, just to make sure it was fresh. The leaf plates, too, I'd thoroughly chilled, and judging from the ooohs and aaahs around the table, the flavors, it seemed, were balanced: the sweet of the melon, the spice of the ginger, and the cool of the mint. 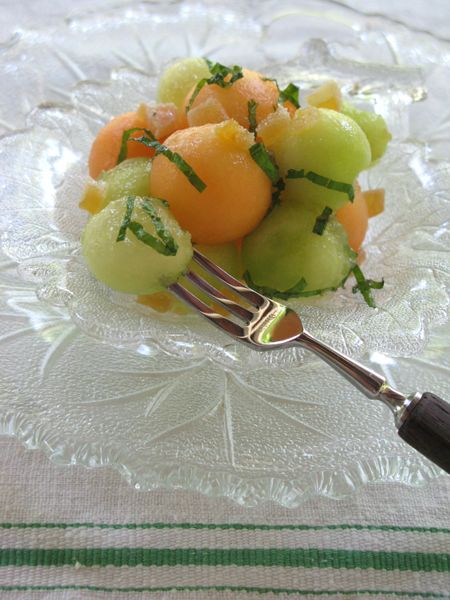 Entertaining, especially in the summer, should be fun, not too formal, with ingredients that are seasonal and fresh. So often I hear from people who are, in a way, overachiever entertainers, trying to whip up the fanciest, most exotic meals they possibly can. Truth is—even the simplest foods, thoughtfully presented, can make for the most memorable meals.

And what about you? What parties, big or small, are you planning to throw this summer?