The holidays are upon us, everyone, so let's start entertaining, shall we? For a little inspiration, here's an article from Friday's Greenwich Time about a few holiday table settings I did last month at Consign It, one of my favorite stores for great vintage china and serving ware. Thanks so much to Beth Cooney, a lovely woman and talented writer, for doing the article! This is the layout as it appeared in the paper. 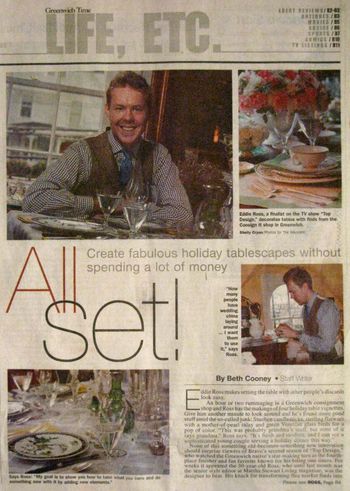 And here's the article in full. To go along with Beth's words, I've added a few more pictures as well. Enjoy!

Eddie Ross makes setting the table with other people's discards look easy. An hour or two rummaging in a Greenwich consignment shop and Ross has the makings of four holiday table vignettes. Give him another minute to look around and he's found more good stuff amid the so-called junk: Steuben candlesticks, sterling flatware with a mother-of-pearl inlay and green Venetian glass birds for a pop of color. "This was probably grandma's stuff, but none of it says grandma," Ross says. "It's fresh and modern, and I can see a sophisticated young couple serving a holiday dinner this way." 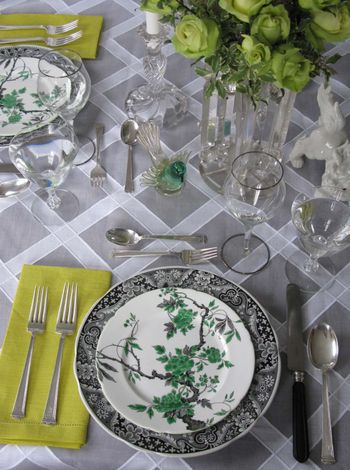 None of this something old-becomes-something new innovation should surprise viewers of Bravo's second season of "Top Design," who watched the Greenwich native's star-making turn as the fourth-place finisher and fan favorite known for his biting one-liners. For weeks it appeared the 30-year-old Ross, who until last month was the senior style editor at Martha Stewart Living magazine, was the designer to beat. His knack for transforming flea market finds into fine design was a hallmark of the competition. This, after all, was the man who outfitted a wall with shredded industrial carpet to brilliant effect and packed sterling platters in his suitcase, "just in case." 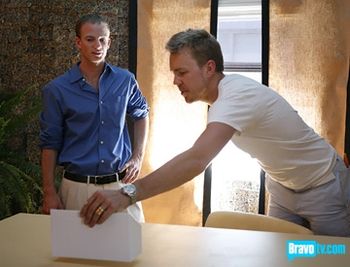 (The top prize of $100,000 and a spread in Elle Decor magazine went to edgy designer Nathan Thomas.) "From the beginning, I sort of knew I wasn't going to win. I mean why would you give a spread in Elle Decor to an editor of Martha Stewart? It's never going to happen. I was glad I did it and how things have worked out for me."
Ross, who says he is anxious to shed the reality show contestant label, is already making good on that goal. His design blog, EddieRoss.com, boasts 17,000 hits a day. (Martha Stewart is an advertiser.) He recently resigned from his post to devote more time to the blog and other ventures, including guided flea market field trips in New York and other cities, which can be booked through his Web site. In preparation for an upcoming blog feature devoted to holiday table settings, Ross asked us to meet him at his go-to spot in Greenwich, Consign It on Mason Street. 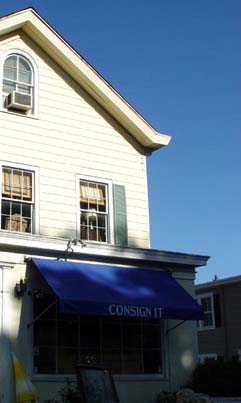 Ross, who grew up in Glenville, says of his favorite local shop: "I've been coming here since I could drive." Ross used the shop to score interesting serving pieces during the two years he ran his own catering company in Greenwich. "I got in the habit of coming to consignment shops because I like nice things, but I'm always on a budget. This was always a great place to pick up a beautiful platter or serving pieces and not go broke doing it." 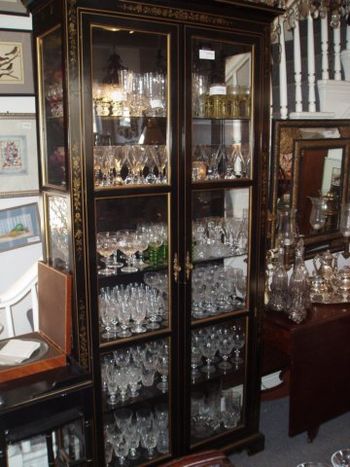 Ross says he wanted to shoot an upcoming feature for his blog at a consignment venue because he considers it more inspirational and "real. Especially in a bad economy. I mean how many people have wedding china laying around that they are sick of or is still in the box? I want them to use it. They just may need to think about it differently" 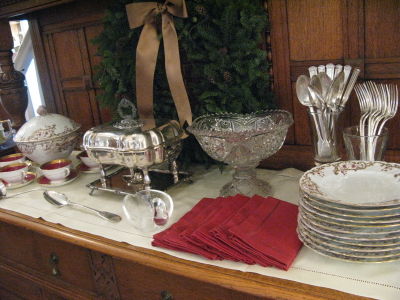 His theme for his four holiday tables—for a Christmas brunch, formal holiday dinner, a Hanukkah or New Year's dinner party, and a holiday buffet—was melding old with new. "My goal was to show you how to take what you have and do something new with it by adding new elements. Four new plates or mixing up the flatware can change everything without a huge investment." 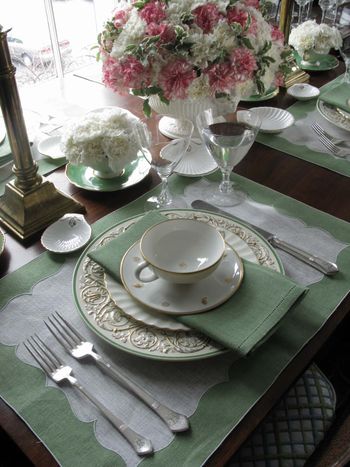 Ross worked with some of his own possessions adding consigned pieces, new linens and inexpensive fresh flowers. He borrowed linens for the shoot from Home Boutique of Greenwich and hit the New York flower market at 5 a.m. The day before the shoot last month, he canvassed the shelves at Consign It with his partner, Jaithan Kochar, a former hotel and restaurant designer, who collaborates on his blog. The couple brought in some sterling and a few other pieces from their apartment in Hell's Kitchen. Although they own the pieces, Ross says: "Most of them were finds, too. I do buy new things, but not often. I kind of like the thrill of the hunt." 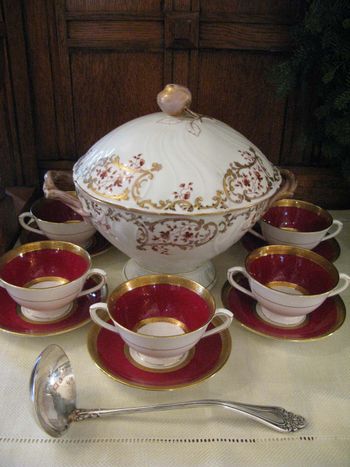 Here are some of Ross' tips:

Breathe new life into old serving pieces. Ross filled small china plates and serving pieces with small, silver ornaments to dress up individual place settings. He stuffed a fluted silver vase in a sterling bowl to create a two-tiered base for an elegant arrangement of purple hydrangea. He then tucked silver ornaments in the purple flowers for accent. "It cost about $45 and would have cost five times from that coming from the florist."

Rethink your lonely china. Ross uses teacups to stash French milled soap in the bathroom. "Why should they be sitting in a cabinet? Please, take them out and use them." He also loves them as "mini" vases. He dressed up his Christmas brunch table by tucking a few white carnations into consigned green-and-white china teacups. He also used a creamy white soup tureen as the base of a larger arrangement of red and white carnations. "It looks like a cool take on candy canes," he mused. 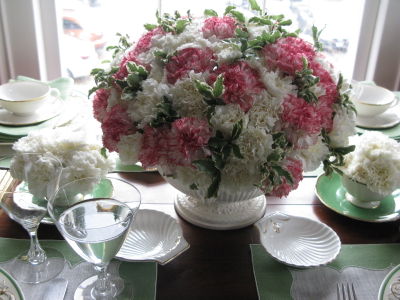 Monograms are cool, even whey are not yours. Ross used stamped sterling pieces at one table with a sense of fun. "I just look at it as a cool insignia. No one is really staring at the initials. They just look pretty."

Play with your silverware. Since he often hunts for his sterling at flea markets, Ross likes to mix. 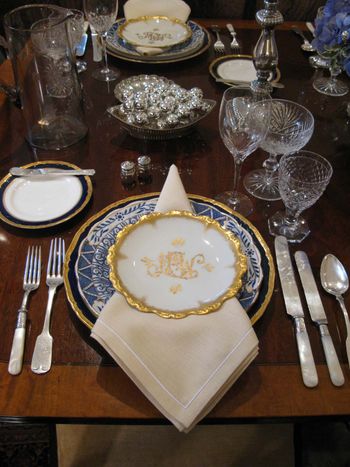 Learn about good stuff. Ross found four stunning Steuben candle pillars consigned at $450 each. "Trust me, they are a good deal if they are in your budget. They are four times that new and they are just as beautiful. I am not going to want to leave them behind." Mixing the crystal with Depression-era candlesticks and Venetian glass birds on a lattice-patterned linen table cloth created unexpected chic. 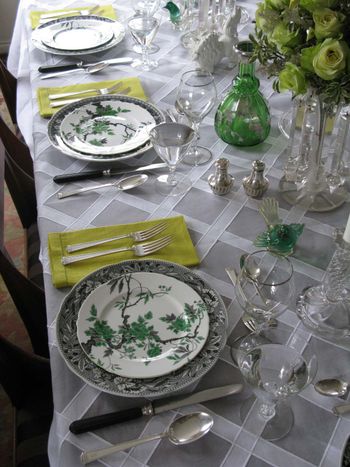 "It's updated and new even though the stuff is old," says Ross, whose next stop was his favorite Goodwil and Salvation Army thrift shops.