The estate in Greenwich where my grandfather Eddie worked for more than forty years, tending to every tree, shrub and flower as though his own, remains one of the best kept secrets in all of Connecticut. Every summer growing up, my brother Justin and I would accompany Pop-pop to work, where we'd help him make cuttings from coleuses and geraniums in the greenhouse or de-weed the gardens around the property. Mondays were my favorite, when Pop-pop would put me in charge of picking vessels for the arrangements we'd make for the house—nearly twenty in all. But over time, the surrounding properties were divided and sold, altering the very soul of the earth I loved. Returning now to these grounds, where verdant, rolling lawns descend to a beach still untouched by time is like traveling through history. Join me, won't you? 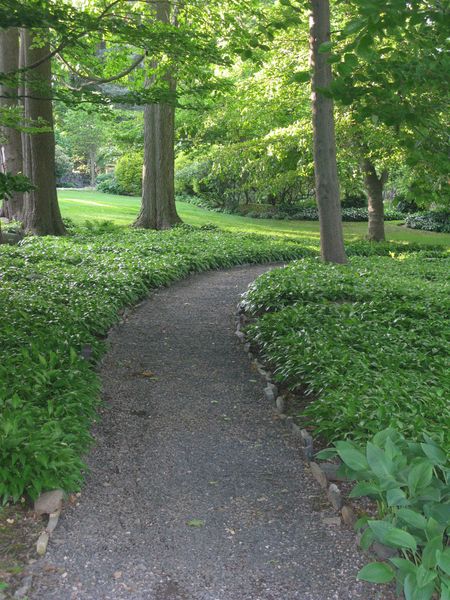 From the main house, we'll take the path flanked by hosta, pachysandra and boxwood, growing lush in the shade of hundred-year-old trees. 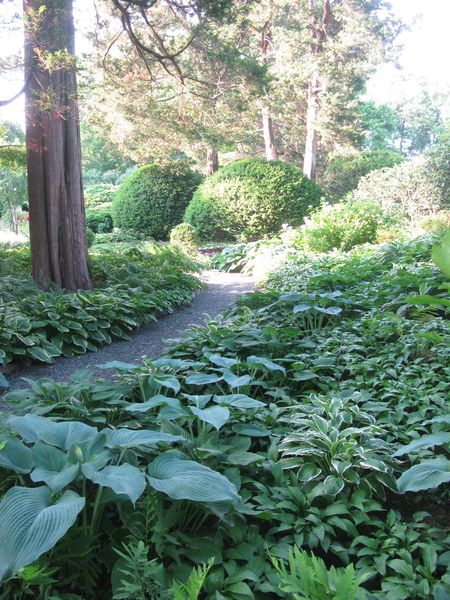 As we near the rose garden, pebbles turn to stone with a glimpse of the wisteria pergola beyond. 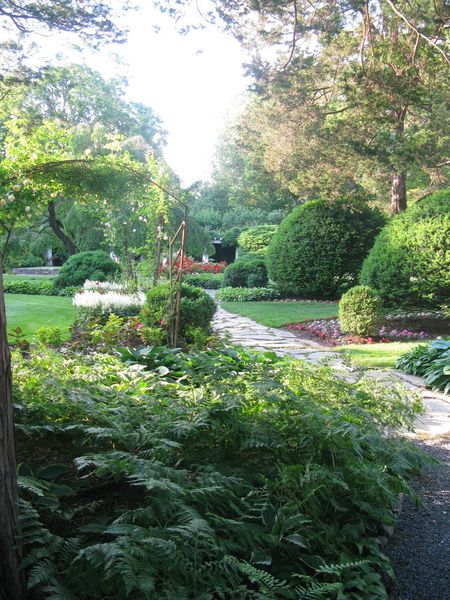 In the European tradition, garden roses, planted formally, surround a marble fountain. Many of them my grandfather grafted himself to produce specimens of unparalleled color and fragrance. 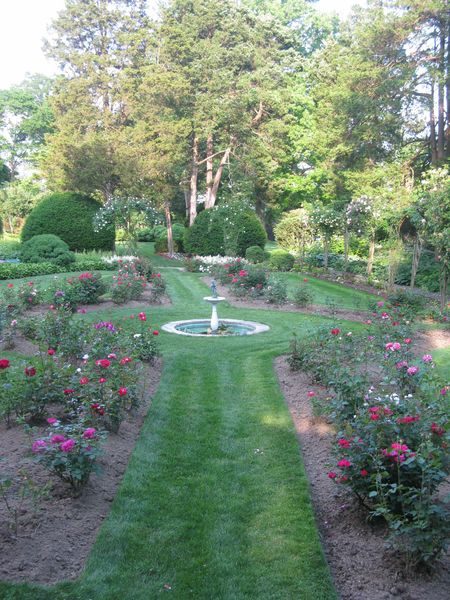 The yellow climbing roses always made the most stunning arrangements. "Make sure you get the top ones," he'd say, holding me up with the clippers. 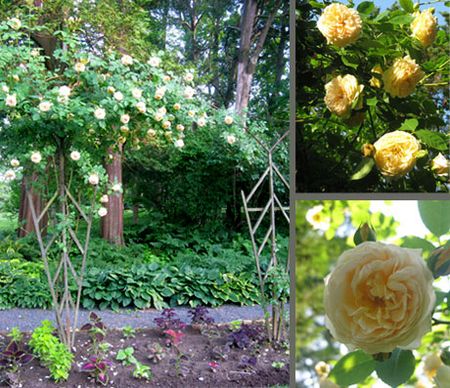 To this day, the garden roses he planted are some of the beautiful I've ever seen. 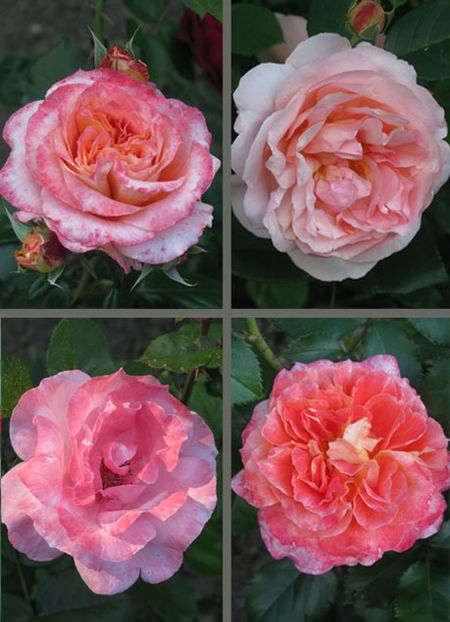 Their colors could inspire cakes, table settings, even entire rooms. 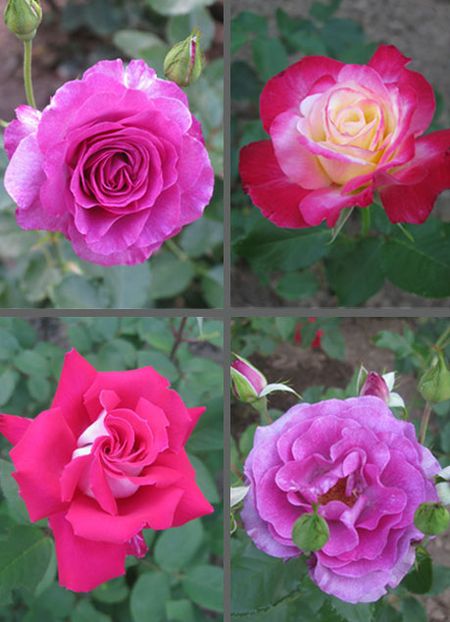 Now back to the path leading to the pergola with the sweet smell of spray roses everywhere around. 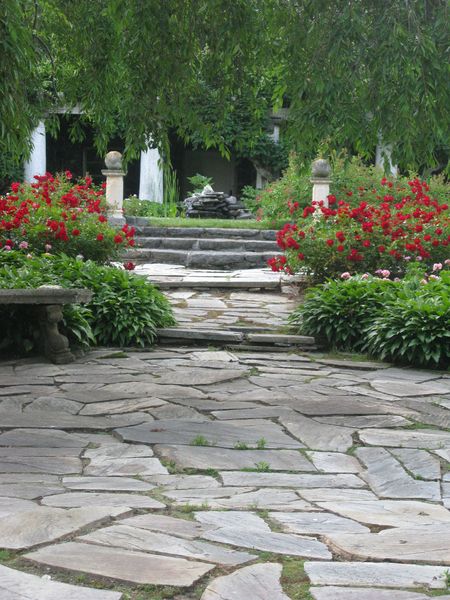 In the spring, a lush canopy of lavender wisteria shades the interior. 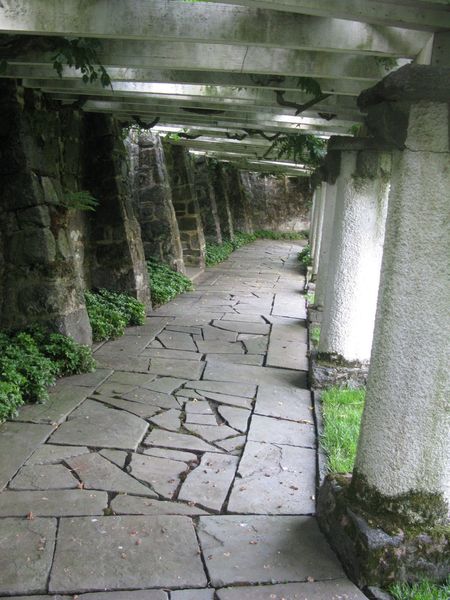 From within the pergola looking out, framed views of the garden shift like the seasons. 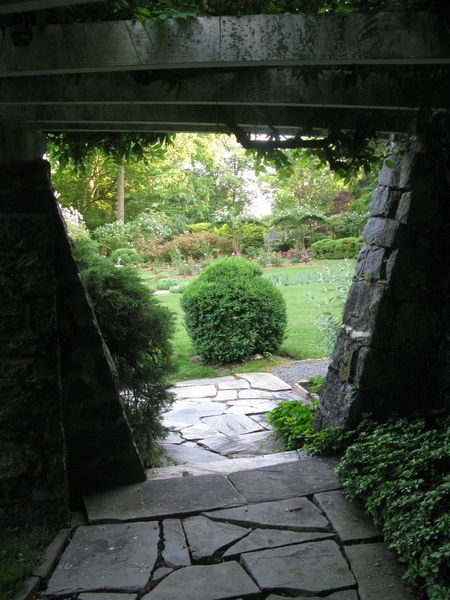 And at the end, a moment of quiet by the reflecting pool filled with koi. I was in charge of the feeding, a job requiring the utmost care. "Knock three times," Pop-pop would say, pointing to the pool's edge. "Then six shakes and that's all." 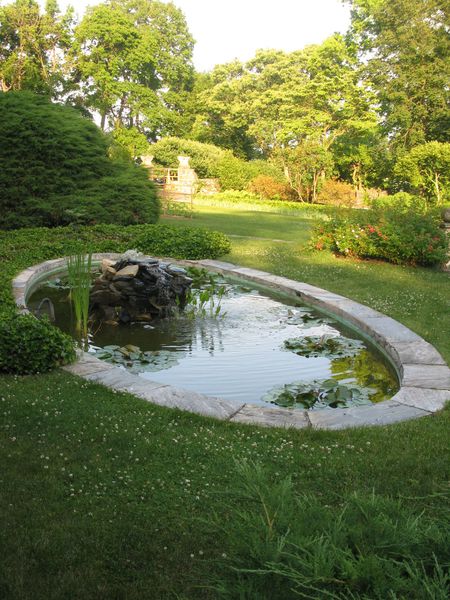 Now up the stairs from the rose garden… 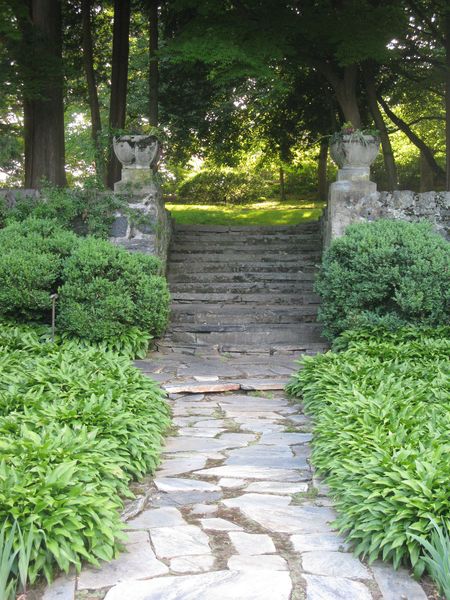 …and a look back at a pair of Egyptian rams keeping guard. 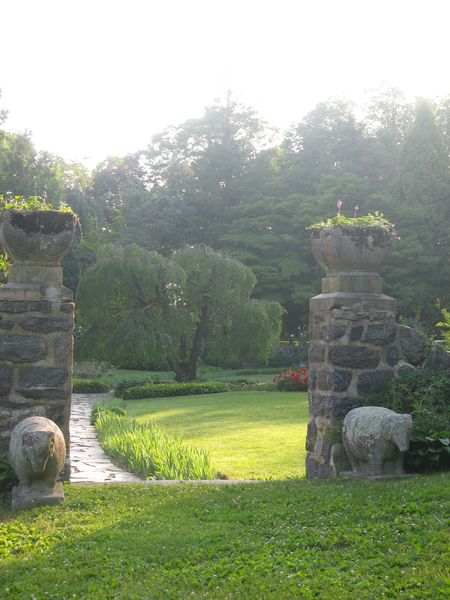 A hundred oaks await, where Justin and I would race each other to the shore. 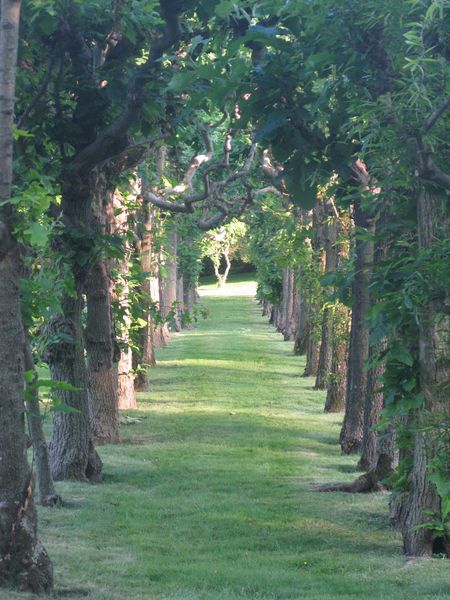 Everywhere around, in the vast expanse of land, sculptures from far and distant places nestle in the landscape. 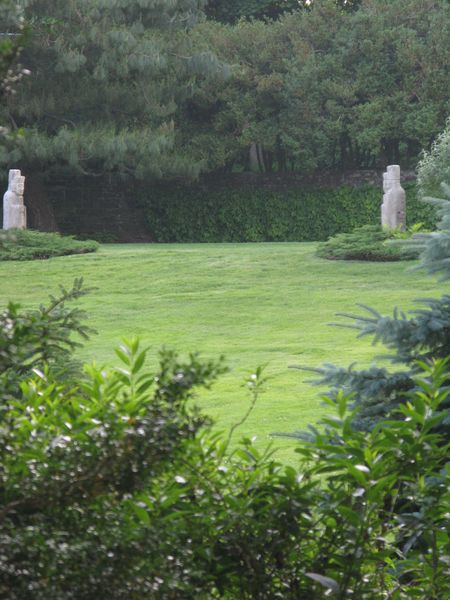 Most of these works were created by noted artists well before they were noteworthy. 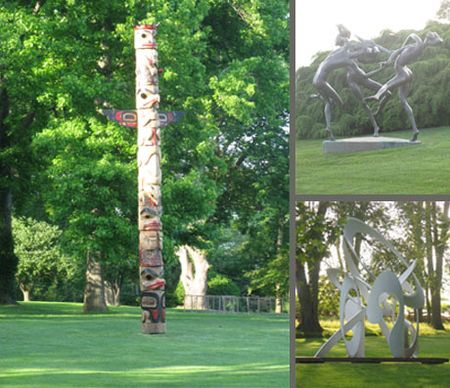 My favorite sits on the horizon, overlooking Long Island Sound, a modern masterpiece in red-orange steel. 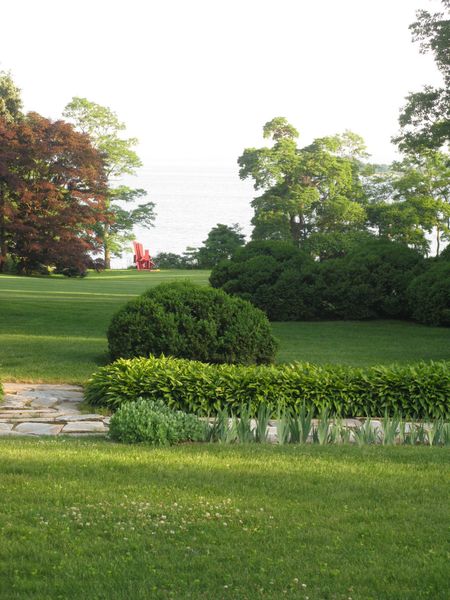 From the gazebo, we'd watch boat races and fireworks on the water. 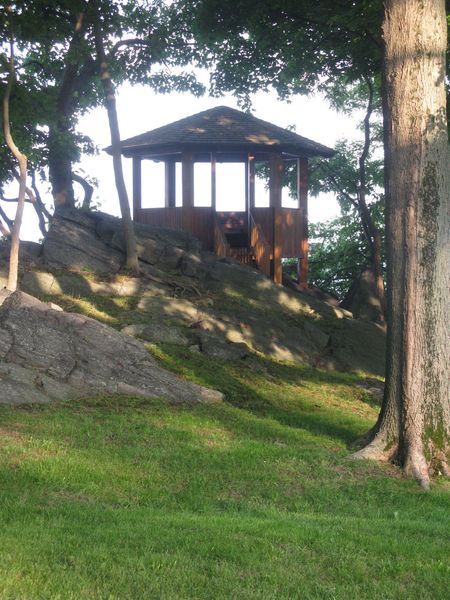 And on days my mother took us to Island Beach on the ferry, Pop-pop would stand, smile proudly and wave. 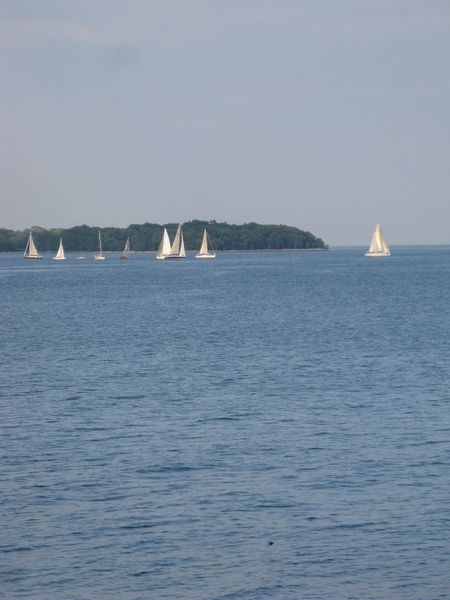 The shoreline below the gazebo is rocky and untouched with the kind of natural beauty rarely seen in Greenwich today. 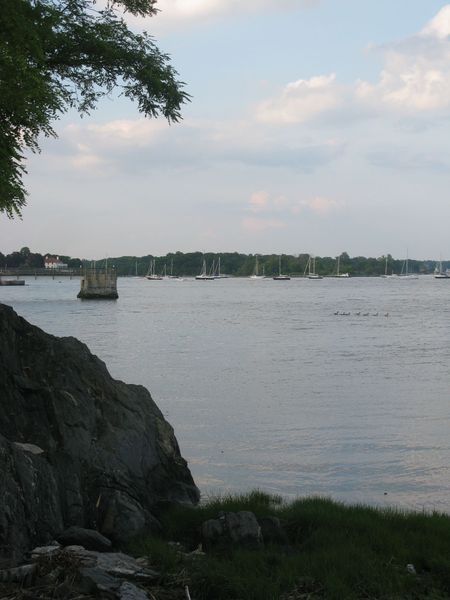 As dusk settles around us, I return once again to familiar shores full of shells and sea glass and the memories of making things for my mother, my grandmother—and just about anyone else who'd take them. 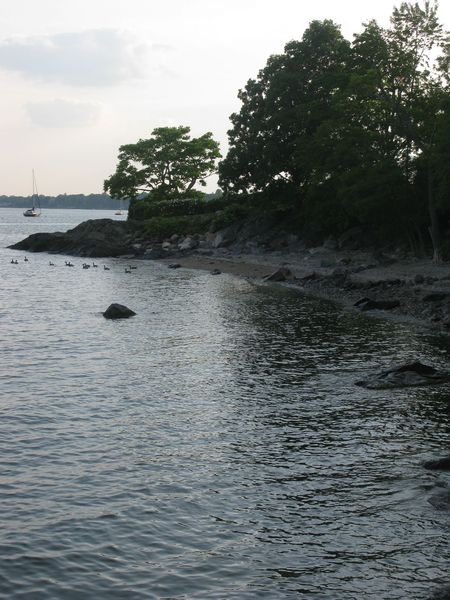 Sometimes, even the things we're quick to forget grow better and more beautiful with time. 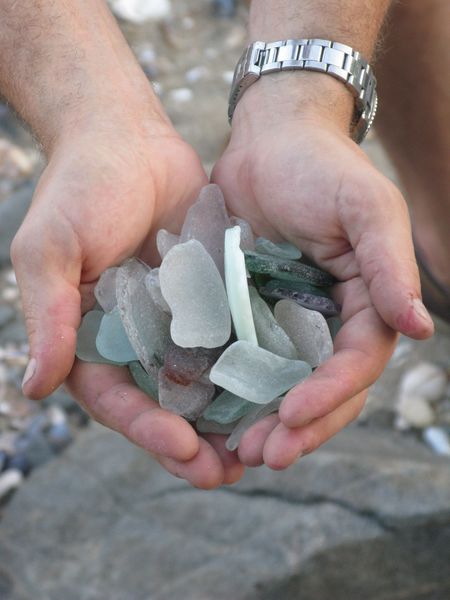